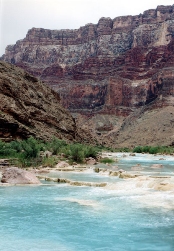 Recently, the Secretary of the Interior proposed the prevention of new uranium mining claims on roughly 1 million acres of public land near the rim of the Grand Canyon of the Colorado River, specifically in the Havasu Creek, Kanab Creek, and Little Colorado River watersheds. This area is the subject of many recent uranium mining claims, and future claims are predicted. In response to this proposal, an interagency Draft Environmental Impact Statement was prepared that compared four alternatives that would “withdraw” varying amounts of public land from new uranium mining claims. Based on this analysis, American Whitewater believes that the proposed 1 million acre withdrawal is the right thing to do. Limiting uranium mining in these areas will limit risks to the water quality and flows in several iconic tributaries to the Grand Canyon, as well as the Virgin River.

The Bardstown Boaters have joined a formal comment letter in response to the analysis that asks the Department of the Interior to adopt the Secretary’s proposed withdrawal of 1 million acres from new uranium mining claims. We hope that you will agree that this is an important and obvious response to a significant threat to the Grand Canyon.

Our members have a deep personal connection with the Grand Canyon of the Colorado River and many more aspire to develop one.  For many of our members, paddling the Grand Canyon is a once in a lifetime opportunity requiring years of waiting, planning, and saving to bring to fruition.  The Grand Canyon offers the longest backcountry river journey in the lower 48 states, and is recognized around the world as one of the most beautiful, remote, and challenging river trips on the planet.  Demand for this journey far exceeds the number of permits allotted, and citizens from across the country have an equal chance of securing a permit. We are deeply concerned that new uranium mining on one million acres around the Canyon could threaten this iconic national treasure.

In your public letter accompanying the DEIS, you stressed the importance of offering substantive comments, which “question, with reasonable basis, the adequacy of, methodology for, or assumptions used for the environmental analysis.”  Your analysis failed to consider the impacts that unrestricted or under-restricted uranium mining could have on Grand Canyon river trips.  The people on these trips, our members, literally live in the canyon for weeks at a time.  They marvel over, drink from, and swim in the Colorado River as well as cherished tributaries like the Little Colorado River, Kanab Creek, and Havasu Creek.  Experiencing each of these streams is a vital part of paddling the Grand Canyon, and the water quality and quantity of each is threatened by uranium mining.  Failing to consider the very real risks to this incomparable and irreplaceable recreational experience is a massive oversight in the DEIS.

Your analysis seeks to quantify the risks of allowing uranium mining near the Grand Canyon.  The results of your analysis confirm that risks of long term water quality and quantity impacts exist that could impact iconic tributaries to the Grand Canyon.  We believe that by excluding the Grand Canyon paddling experience from your analysis, including hiking along, swimming in, and drinking from the tributaries, you have miscalculated the risks of allowing future uranium mining.  Radiation and other pollution in these streams would directly impact human health and perceptions of wildness. Even very small reductions in flow in tributaries and springs would impact the experience of these places.

The quality of the recreation experience in the Grand Canyon is so unique and valued by the American public that your agency should seek to minimize risks to that experience – no matter how small you believe those risks to be.  Likewise, the potential consequences of long term radiation pollution and other uranium mining related impacts to Grand Canyon springs and tributaries are simply too severe to risk.

Therefore, to provide the greatest level of protection for this very special place, and these treasured experiences, we recommend that Secretary of the Interior Ken Salazar’s moratorium be upheld and that the BLM adopt Alternative B, the 20-year withdrawal of approximately 1,010,776 acres of federal mineral estate from the location and entry of new mining claims under the General Mining Law of 1872.

Thank you for considering our interests.