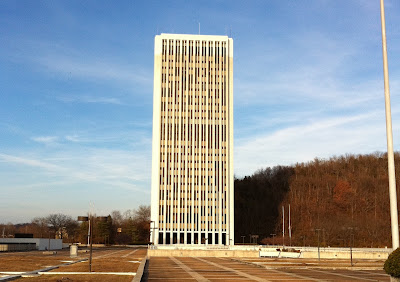 On Friday November, 19 I participated in a one day Paddle Sports Development Conference at the offices of the Kentucky Tourism, Arts and Heritage Cabinet. The purpose of the meeting was to have an initial discussion about ways to help promote and develop new paddling opportunities in Kentucky. This included the whitewater park that the Bardstown Boaters have been developing. After receiving our cost estimates in February of 2010 for the restoration of the rubble dam on the Beech Fork River, I was hoping to learn of some possible grant opportunities for the park.

This meeting brought together some of the most influential people in the Kentucky paddle sports community, together with those in the state government, to look at what potential projects are out there needing support, prioritize those projects for much needed support, and start working together state wide to advance our sport for the benefit of our state, our local communities, and our locally owned businesses.

The two projects that we spoke about the most were the Russell Fork River and the Beech Fork in Bardstown. Steve Ruth is leading an effort in getting more recognition for paddling opportunities at the already great, but overlooked, whitewater stream in Eastern Kentucky. He is alos working on developing a whitewater park on the lower section of the Russell Fork. The Bardstown Boaters spoke about the Beech Fork Whitewater park project and the work already done by Riverrestoration.org there. Briefly mentioned, was the proposed park in Bowling Green.

Some of those who were in a attendance included Kevin Nuss and Nick Hope with the Kentucky Sports Authority. They billed themselves as the ones who bring events to Kentucky. Elaine Wilson and Seth Wheat represented the Kentucky Office of Adventure Tourism. These might be the folks who could assist us with locating grant funds for the Bardstown project. From the department of Fish and Wildlife we spoke with Benjy Kinman and Mark Cramer, one interesting thing they are doing with federal money is building boat access ramps to lakes and streams. This may be an avenue to explore for the Bardstown project.

I presented the Bardstown project to everyone and harped on the numbers. $371,000 to build our park. That is quite low which it is due to the access of materials at the rubble dam, the existing road access, land ownership by the City of Bardstown, and the infrastructure of Bardstown tourism industry, all which is currently in place. I think this helps immensely with getting the park built. We just need to modify the hazardous dam into a playful whitewater feature, that will then be primed for world class whitewater events and daily recreation oppertunities.

Overall my presentation was received very well by the group. Many were impressed that we had come this far in the process, we are the only ones who have some idea of the costs involved and again, they are relitivly low costs at that.

The next steps from all of this seem to be more meetings and greater coalition, something more substantial in numbers so we can say, here look, we are 5,000 strong and we want more outdoor paddling opportunities for Kentucky. Here are some great places to start.

A very special thanks goes out to Doug Davis who made this meeting happen. In his short time in Kentucky already, I feel that he has done much to help progress the paddling scene in the state and on a national level. The man is driven, just like many others who were seated at the table today. That is what I love most about the Kentucky paddling community.