Heaton Will Not Seek Second Term 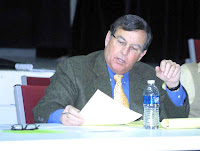 By Frank Johnson | The Kentucky Standard
Bardstown Mayor Dick Heaton announced his intention not to run for re-election in the fall at the close of Tuesday’s city council meeting, pointing to ongoing complications from his radiation treatment for throat cancer.
Heaton, who is finishing up his first term in office, said he had enjoyed his tenure as mayor, but he faced a lot of uncertainty in the future as regards his health. He also said the job of mayor is a time consuming one and stepping aside would allow him more time to spend with his family and business.
“It’s not a decision I am necessarily happy to make … but I think it is the best decision at this time,” Heaton said.
Heaton told the council that the radiation treatment had caused a new condition in his mouth that only allows him to open his jaw about a third of the way. Surgery will be required to help alleviate the problem and he said it’s possible he may need further surgery after that.
“If my treatment had gone as planned, this wouldn’t have happened,” he said.
Heaton previously served two terms as a city councilman before entered the race for mayor four years ago. He won a three-way election against incumbent Dixie Hibbs and challenger Steven Wimsatt.